Q: The new Uber ride-sharing service has made itself a Campaign Issue as much by the timing of its arrival in The Capital as by its portents for the Taxi Industry, OC Transpo ridership and the City’s licensing machine. What’s your position?

A: “The uber upset in the Ottawa Taxi Industry over the new Uber ride sharing system seems to me to be all Crocodile Tears. And the official uproar at City Hall over ‘non-licensed taxis’ is just a nod to the power of the local taxi service hegemony,” Ottawa Mayoral Candidate Darrell Duck asserts.

“Of course, the City administration loathes anything it deems in need of paying licensing fees that is getting away without tithing more than Nature abhors a vacuum. ‘If we declare Uber a taxi service, we can get money from people!’ the bean counters speculate, with glee. The thing is, Uber is not a taxi service. It’s ride-sharing. And Ride-Sharing is something the City has officially approved of in the past, especially during Transpo strikes – when it was popular for the administrators and especially for the politicians to approve of it.”

“The controversy is all centred on the money issue. The Taxi Barons feel slighted that they might be losing business over Uber and the licensing people feel justified in hammering Uber drivers because they are accepting gas money in return offering rides. The bean counters, however, are reaching for something that I believe will ultimately prove beyond their grasp. They contend that private cars are not properly licensed, safety-inspected or insured to take paying riders. The truth is, OC Transpo is terrified at the potential loss of fare revenues if people choose the comfort of private cars over the morning and afternoon mayhem of the buses. God forbid, people might even save money using Uber compared to buying a bus pass!”

“Now… What about the office crowd from Barrhaven who have ride-shared for years on a similar basis to Uber-ing? They share expenses and I’ve never heard of anyone in a car-pooling group complaining. On the contrary, they tend to gloat about the money they save and all the meaningful work they get done on their commute. If they’re all from the same department, they can actually get in the first meeting of the day while sitting in the Drive Thru line at Timmy’s! And that’s just the tip of the Car-pooling Benefit iceberg.”

“And ride-sharing potentially keeps three out of four rush hour cars off the road. Imagine what the Queensway would be like at 8:30 in the morning and 4:30 in the afternoon if people didn’t ride-share!”

“Bottom line: Ottawa Taxi Royalty needs to back off the Sheriff of Nottingham thing and leave the ride-sharing Robin Hoods alone. And the politicians need to state openly and honestly whether they are in favour of ride sharing or not!” 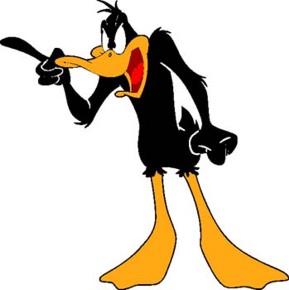 In spite of a solemn promise not to disrupt the proceedings with any out-of-control, zany behaviour, candidate Darrel ‘Daffy’ Duck has been dropped from any remaining Ottawa Mayoralty Campaign debates.

“I went out of my way to be fair,” Duck insists. “I promised to keep my cool and show up clean and sober. All I wanted was the same chance as any other candidate to have my views heard and to confront my opponents on their obvious shortcomings.”

A letter received this morning from the events’ organizers indicated that, in their sole opinion, he does not qualify for a place at the podium because he is not considered a ‘serious’ candidate. The letter also calls into question Duck’s ability to meet even the most basic of qualifications for participation, charging specifically that he is not bilingual.

“I speak several languages fluently,” Duck counters. “Though my mother tongue is Duck, I converse like a native in English, Spanish, Californian and Goose. In addition, I have a working knowledge of Crow, Blue Jay, Cardinal and Robin, as well as Squirrel, Raccoon, White-tailed Deer and Coyote – all of which any serious politician needs to function effectively within our infinitely diverse community.”

Event organizers responded to Duck’s detailed, reasoned reply with a curt, unelaborated, “See? We told you so!”

Duck may not be able to take part in these important campaign debates, but he promises to campaign even harder in response to what he characterizes as bald speciesist discrimination.

“Calm and collected on the surface;
Paddling like Hell underneath
– for YOU!”

Q: Where do you stand on the vexed question of Pedestrian Overpasses?

A: I’m all for them! I believe we should have more of them. In fact, I’m strongly in favour of installing pedestrian overpasses anywhere Mother Ducks need to lead their children across busy roads to get to their swimming lessons. 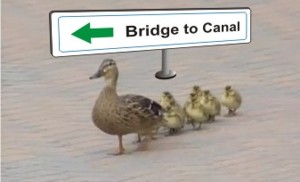 I’ve looked at the comparative costs of placing crossing guards at all such locations adjacent to the Rideau Canal and the Rideau and Jock Rivers within the City limits and recoiled at the fiscal impact of instituting what amounts to a perpetual expenditure, the costs of which can only be expected to rise in future.

I’ve also looked into busing the kids to school. Again, this amounts to committing the City to a perpetual and perpetually growing expenditure – a luxury we can no longer afford in the current tight, and tightening, economy.

A Thanksgiving Message from the Candidate

As we count down the days until the 2014 Ontario Municipal Elections, it is fitting to pause in our exertions to reflect upon all that has gone before and that which is yet to come. 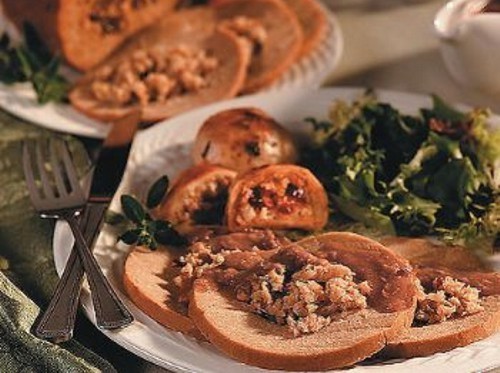 When you and your family gather ’round your holiday feast table,
take a moment to remember those who are less fortunate
than you – like Turkeys. They are constituents, too!
Enjoy a Tofurky Roast this year!

This weekend, we, along with all Canadians, are called upon according to generations of tradition to give thanks for all of the bounties and benefits that we enjoy as citizens of a Great Nation.

Let us all give thanks, then, for everything we have and everything we feel entitled to acquire in the coming year, secure in the knowledge that our immense, unprecedented debt – both as individuals and as a nation – will live on long after us to tell our tale.

Ottawa Mayoralty Candidate Darrell Duck finishes his second week on the campaign trail today and, already, some major trends, both in voter temperament and candidate candour, are coming to light.

Some of Duck’s Non-Human constituents will be disappointed
to see the Green Bins go. But most are all for trashing
the catastrophic composting program.

I was suspicious to hear, this week, that a so-called Property Owners Ticket has formed up behind several of the major Campaign issues. I’m with them on canning the Green Boxes and increasing garbage pick-ups during the summer. But on other issues, I’m not so sure.

Property owners usually support development over conservation. Not only that, but they usually put their interests before those of other species with which they co-habit. That’s one reason that the majority of my constituents are cautious about any attempt to organize hard-core Property Owners.

Representatives of the Small Citizens’ Advisory Tribunal (SCAT) and the Feathered Ottawans’ Welfare Lobby (FOWL) have approached me with strong concerns about the pressures that a powerful Property Owners bloc at City Hall could place on their homes and living environments. I agree wholeheartedly.

But I also recognize that these and other groups have a history of adversarial relationships with the Human population, in general. The Squirrels and Chipmunks, for instance, have steadfastly refused to negotiate an agreement over Vegetable Gardens which would benefit both sides. My avian constituents, likewise, are adamant in their stand that they have just as much right to Raspberries, Currents, Grapes and other high-hanging fruit as the Humans. The Humans, predictably, disagree just as adamantly.

I’ve tried to bring the Humans and Non-Humans of our City together for years. And I promise I’ll continue my attempts at mediation with even greater ardour when elected. I just can’t see how an organized Property Owners bloc can help advance this vital cause. Q: Are you in favour of greater transparency in local government?

A: No. I’ve done a great deal of research on this issue and I’ve come to a startling but obvious conclusion. What we need is less transparency!

I have long been concerned with the threat posed by mirror-clean windows to my avian constituents, dozens of whom are seriously injured or killed every year flying into them. When elected, I will immediately halt the cleaning of windows at City Hall and other municipal buildings to ensure the safety and security of Ottawa’s bird population.

But that’s not all…

For a start, I calculate that the City will save something like $250,000 annually by firing all the window washers. And allowing the windows of municipal buildings to crust over with a layer of light grey grime will not only reflect away summer sunshine taking a load off of air conditioning systems, but add a winter insulation factor of R=0.000042. Taken together and applied across all City properties, those factors could produce an annual operations fund saving of over $19!