Duck wraps up Campaign with a Bang! 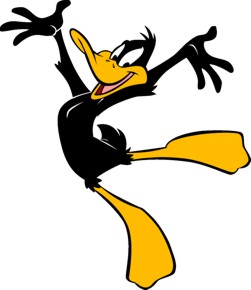 Ottawa Mayoral candidate Darrel Duck wrapped up his official campaign today with a final address to the faithful in the Atrium at City Hall.

“By thith time Monday, we will be well on our way to victory! I can feel it in my boneth!” shouted a fiesty Duck, exhibiting the slight lisp that has become his oratorical trademark when he’s really on a roll.

The capacity crowd went wild with approval, pulsing with enthusiasm, pushing those at its outer extremities into the ceremonial pool. No bystanders were seriously injured.

Indeed, pre-election-day polls commissioned by the Duck organization showed the candidate leading all other contenders by 25 points.

“Woo Woo! Woo Woo!” Duck hooted, possibly attempting to provoke a cheer from the crowd. Campaign Manager George Jungle assured assembled media representatives that the candidate was not, at that time, in a drunken stupor.

It was at that moment that the candidate blew himself up spectacularly with six sticks of dynamite and disappeared in a cloud of smoke. A few seconds later, however, he reappeared, adjusting his bill but apparently unscathed, and wearing the same suit, wading into the crowd from the rear, shaking wings and waving triumphantly to the television cameras.