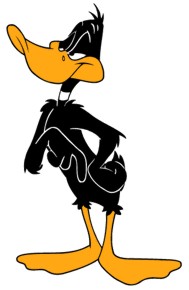 Critics have, of late, raised their voices questioning the fitness of Darrel Duck to properly fulfill the responsibilities of the office of Mayor. Not surprisingly, supporters are rallying righteously to his side!

True, Duck is in his 94th year – but he remains as ageless as only an animated legend can.

Duck is, in fact, uniquely suited among the Mayoral candidates in that he can sit through interminable Council and Committee meetings without appearing to tire. Scientific studies have proven that ducks can sleep with one side of their brain at a time while the other side remains awake and alert.

As for Duck’s physical condition, who among the other candidates can make two full circuits of the Council Chamber, shouting “Woo Woo! Woo Woo!”, bouncing off of desktops, walls, ceilings and bystanders, not once touching the floor?

And how many of the other candidates can say they’ve repeatedly been blown up by six sticks of dynamite only to reappear moments later, apparently unscathed, wearing the same suit?

Critics also complain that Duck has, throughout his life, exhibited a short temper and a tendency to explode violently at the slightest provocation.

“That’s all in the past,” Duck declares. “I’ve mellowed. My close associates will confirm that I rarely employ expletives any stronger than ‘Sufferin’ Succotash!’, now – and only when I am in a drunken stupor.”