Q: There has been a load of controversy over the decision by the current Council to dramatically change the way household waste is collected from Ottawa residences. What is your position in the Great Garbage Debate? 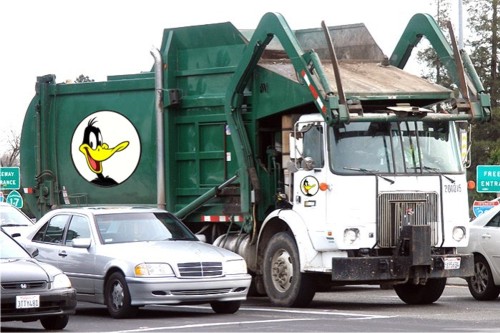 I’ll put a new face on Ottawa Garbage Policy
if voters elect me Mayor on October 27!

A: Well, that’s a trick question! I mean, there are so many separate parts to that question…

For instance, what do I think about the contract with that composting operation that is apparently not composting? Or, at least, not composting enough to fulfill the contract? I long for the Good Old Days, when you could just give The Boot to a contractor who wasn’t performing – and sue him for your costs and loses, as well. Now, it appears, the current Council feels it has to give these guys third, fourth and fifth ‘second chances’ to make good. At our expense. And all the good feelings we’re supposed to get from using our Green Bins religiously go down the drain. How do you even put a price on that?

Then, there’s the whole question of bi-weekly garbage collection.

What about those of us who have Special Needs? There may be accommodation in place for those needing to get rid of disposable incontinence paper goods. But what about cat owners who have mountains of soiled litter to dispose of? What about folks like me, burdened with bags and bags of Canada Goose poop that we have to rake up off our waterfront lawns every week?

The closely-related problem of Garbage Odour three seasons of the year deserves consideration all on its own. It speaks – or, rather, reeks – for itself!

And the Fly Problem. No matter what you do with your kitchen garbage (hold it for composting pick-up or just bag it), two weeks between pickups just gives the damned flies the chance to hatch, harass us, then lay their eggs and hatch a new batch!

Now… Let’s take a moment to look at the recycling of paper, plastics, metals and glass. It’s all well and good that Ottawans rank among the best, most conscientious users of their trusty old Blue and Black Boxes. But we heard, not long ago, that much of what we put in the Boxes goes straight to the landfill anyway, because the recycling contractor can’t – or won’t – handle the bounty.

It goes on and on.

Simply put, Ottawa’s Garbage Disposal Policy is a load of trash. Elect me, and I’ll put things back the way they were, before the Politically Correct Crowd got their hands on power at City Hall and decided it was more important to be SEEN to be doing the right thing than to actually DO IT!